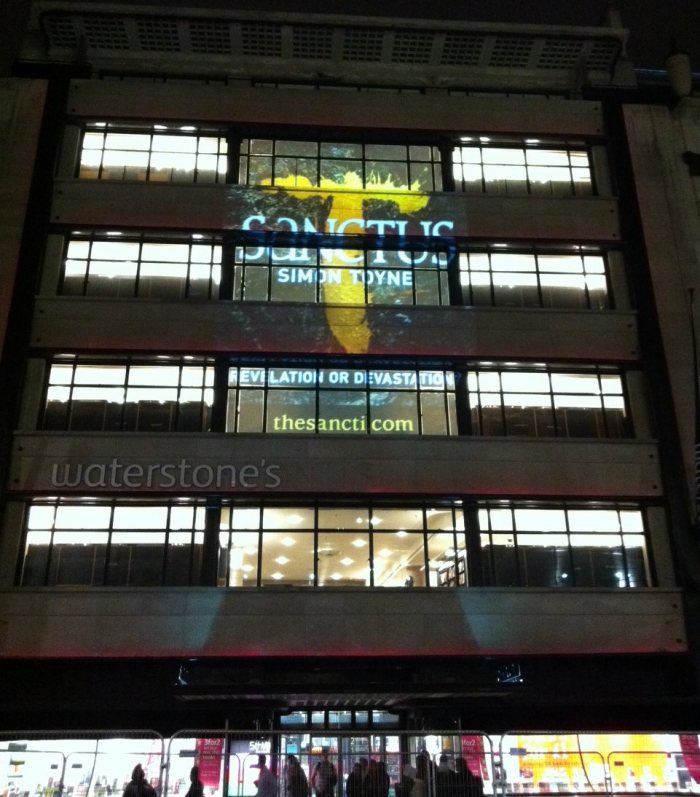 Yesterday (14th April) the book finally hit the bookshelves. It’s been a year since SANCTUS sold at the ‘ash cloud’ London Book Fair and it has seemed like ages, and also no time at all, that publication has come round.

I headed up to London yesterday afternoon with my wife and checked into the Meridian opposite Waterstone’s so we could have a prime view of the huge projection of the book cover on the four storey store front.

It’s a bit weird seeing your name splashed across the front of a large building and even weirder to walk into that building and be confronted by a large wall constructed entirely of your books.

It finally dawned on me that it was all real. The book was in the shops. Now I just had to help sell them.

There was an amazing turnout from friends and family as well as people just coming along for a look. My sister won the ‘furthest distance travelled’ award for coming all the way from Toronto, but my village was also very well represented. They ran out of wine (twice) and my pen ran out just before the end, all of which I take as pretty good signs.

As people dwindled we headed back to the hotel with a small group of hardcore family and team Sanctus members. We ate Croque Monsieurs and devoured chips in the Terrace balcony bar while the book trailers played out four storeys high across the road. It was all very surreal and all very lovely.

We sold over 200 copies on the night and the following morning my wife and I went book spotting along the Charing Cross Road. Every store we went in had copies on display. I signed a load in Foyles to ensure SANCTUS had the ‘signed first edition’ stickers on the cover and went up on the shelf next to Wilbur Smith.

Later when we’d come home and picked up the kids we popped into WH Smiths in Lewis and our local Tescos – just to check – and there they were, right between the James Pattersons and the Jackie Collins, surrounded by cereal and washing powder: another product, another brand.

I’m sure I’ll get used to it in time but I doubt it. I’ve spent my whole life popping into book shops and scanning the shelves. I never really thought I’d see one of mine on sale.