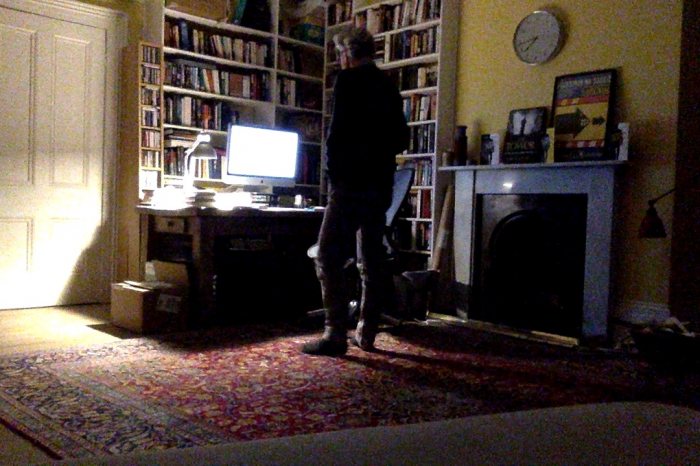 This is me, in my office at night, staring at the first draft of Solomon Creed book two while it stares right back at me. I wouldn't recommend having a staring contest with a first draft. You always lose.

Pay no attention to the time on the clock, by the way. The battery has run out and it's been a quarter to eight for about six months now. I quite like the consistency of it and it reminds me of the similarly time frozen clock in the pub in 'Under Milk Wood', or the one in 'Back to the Future', depending on how high falutin you want to be.

I used to love writing late at night. There was a certain glamour to it - the pool of light, the darkness outside, the sense that it might be finished by morning. As far as I remember, though, it was never done by morning. Mid-morning maybe with eyes like peeled grapes that had been dipped in salt and a vague, exhausted, delirium that was a bit like being drunk.

Since I became a dad, however, I have turned from night owl to homebird almost overnight. I write early in the morning, before everyone else is up and I'm usually done in by 8.30 at night when the kids are finally (usually) in bed and my brain slips into neutral as the first, or maybe second, glass of red wine slips down my throat. I've written four books this way.

But Solomon two is different. For this one I haven't been able to get up and write in the morning at all - just can't do it. Instead I'm slipping back into the old ways, writing later and later and rewriting in the mornings.

I'm not quite sure why this has happened. I suspect it's just the word gods having a laugh at my expense - they do that A LOT. If I was to attempt some kind of rational explanation I might suggest that it's because Solomon is more of an evening character. He suits the shadows. Or maybe its because I can drink more wine at night - a glass of wine at breakfast is generally frowned upon.

Whatever the reason I just wanted you all to know that I'm on it, and here's the proof, and it will be in your hands as soon as I win this staring contest.

Hi, really a nice article. I have been waiting for such a nice post.
Best of luck for your next blog. :)

I love the works from tSimon , have read all of them so far and cannot wait for Solomon 2 !!!

Read the Sanctus trilogy and so very pleased to see Solomon Creed appear on the book shelves. Really enjoyed it and looking forward to the next one!

Having read all your books and being a part time reader, once again Solomon Creed as been written with an excellent descriptive fluency. One thing I do love is that the chapter are never too long so I can grab a quick read whenever I can busy or not...keep up the great work...waiting in anticipation for book 5.

Just finished The Searcher. Mr. Toyne wrote always to tell an author if you enjoyed his book. So - yes, yes, and yes again. More please.

I have just finished The Searcher and I am pleased another Solomon or Magellan story is arriving. Whether it will be soon or later, I will be reading.

I read the Sanctum Trilogy and started looking for your next great read. When I found The Searcher I hesitated to get it and then waited to start it for a couple of weeks as it appeared to be so different from the Trilogy because of the synopsys I had read. I have just finished the book and throughly enjoyed it! This too was a great read, one that kept me turning the pages and left me wanting more of Solomon Creed. I eagerly await book two and beyond!

Just finished Solomon creed, and had to find out if and when a second is on the way. Glad to see there will be more to read soon

I loved your book Solomon Creed. The name of the town Redemption set the tone of the book for me. There are so many themes that I needed to concentrate. Tying them into each other was excellent. Plane crash, bush fire, no memory man, drugs, Mexico, ghost, Holly- what an escape, Ramon, Tio, Redemption, the desert, Quotes Socrates et al, law and order. Will now look for your other books. unfortunately almost no book retailers now in Sydney. Will check with our Council Library.

Will be waiting anxiously for the Solomon Two. Enjoyed the first Solomon tremendously.